Around 80% of the faulty electronic devices I look at repairing are caused by faulty electrolytic capacitors. Sometimes you can see a physical fault with a cap (bulges on top or even leaked electrolytic fluid) but often you can’t. The only way I had to test any suspect caps was to simply replace them and test the circuit. This took ages and could end up unnecessarily costly. If only there were a better way……..

Hang on… what’s that? an ESR meter? What’s that then? 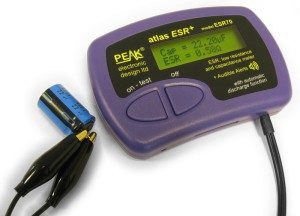 An ESR meter measures equivalent series resistance across a capacitor. Basically it’s a magic tool to tell you if your capacitor is any good or not.

I’ve wanted an ESR meter for ages but having never even used one, I didn’t know how useful it would really be….. Until I got one!!!

I got my grubby little mitts on a Peak Atlas ESR70 (or ESR plus, I’m not sure of it’s official name) and have never looked back. I’ll admit, it’s not something I use every day but it’s one of those tools that even if you only used it twice a year, it’d be worth it. In fact, I get a bit giddy every time I do get the chance to use it….. yes, I know that’s sad…

I won’t fill this post with lots of photos, I’ll just point you directly to the products web page. http://www.peakelec.co.uk/acatalog/jz_esr70.html

Anyway, back to the point. The Atlas ESR70 measures both ESR and capacitance. It’s great for checking caps to see if they are even close to the value they have written on them. I know there is a certain tolerance with the values but sometimes you find a cap that clearly isn’t performing as it should and needs to be replaced.

One feature of the ESR70 is that it can test caps in-circuit… but only in certain situations. If the cap is in series with any other caps, the reading will either be off or the meter will kindly tell you that it’s in-circuit. Nice. To be honest, I hardly test my components in circuit now because there always seems to be something that affects the result so I just whip it out and test it but the feature is there and can be useful in certain situations.

The ESR70 couldn’t be simpler to use. You turn it on and connect legal to buy modafinil online your capacitor. Simple. The LCD display shows the ESR value pretty much straight away whereas the capacitor value can take a few extra seconds. Once the ESR70 has read the capacitor, it makes a pleasant little “ding-ding” sound. If it finds a capacitor that is too leaky, it only makes one little “pip” sound. The beeps are especially helpful when you can’t look directly at the meter because you’re too busy holding the test probes onto a part. If you leave the unit unused for a few minutes, the meter will automatically turn itself off. This is great for people like me who forget to turn things off and then the next time I go to use it I can’t because it’s 2am and there aren’t any battery shops open……. Please tell me it’s not just me who’s experienced this….

Another useful feature is how the test leads are supplied. The unit has a crocodile clip on each wire but it can be  removed to reveal a mini banana plug. This allows you to take off the crocodile clip and connect a pair of test probes for when you need to get into a tight space. As I test most of my capacitors out of circuit, I hardly ever use this feature but it’s good to have. An extra feature on the ESR70 is that it auto-discharges capacitors before it tests them. Some other meters insist you discharge them manually first… who has time for that??

As good as this meter is, there is a little bit of work you have to do yourself (not just this ESR meter but all ESR meters). The LCD display shows you the ESR reading of the capacitor but you have to look up the result on a chart which is supplied with the ESR70. I’ve printed several of these charts, laminated them and stuck them all over the hackshed so I can read the results at a glance. Basically you find the capacitance and the voltage of the component under test and look it up on the chart. If the ESR shown is lower or very close to the value on the chart, chances are that it’s a good cap. If the results are much higher than the chart suggests, then the component is bin food.