Strange title isn’t it. I’ll explain what I mean…

While I was working on these items, it occurred to me that even though they were very cheap and could be replaced for a few pounds, I was actually enjoying myself.

I happened to have a dead mouse in my junk box so I opened it up, un-soldered one of the buttons and swapped the dead button with it. Problem solved.

The USB ornament thing was next.

When you plug it in to a USB port, it’s supposed to light up and change colour. It didn’t.

When I opened it up, I found a small PCB with a chip under a blob of epoxy, 3 LEDs and some resistors. After checking that it had power, I decided that the chip was probably buy cialis soft online faulty and there was nothing I could do… oh, but there was.

I have a few colour changing LEDs in my stock drawer. They have two pins like a normal LED but they have a tiny little chip inside the case. All you need to do is add power and it cycles through different colours on it’s own.

For the sake of 2 minutes work, I soldered the LED to one of the existing resistors and it worked perfectly. 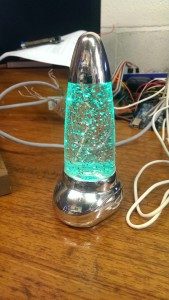 Within 10 minutes, I’d fixed two worthless items (monetary wise) but had made my significant other very happy. Can you put a value on that?

It got me thinking to all the times I’ve built something, fixed something or really done anything and someone says “But why?” “What’s the point?” etc

Well, because I enjoy it, that’s why.  I love nothing more than coming into the hackshed and just tinkering for the sake of tinkering. Call me a sad geek, I really don’t care.

To sum it all up, the next time someone asks “Why?” Just reply with “Because I can”

There really doesn’t need to be a reason to do anything. Just have fun.